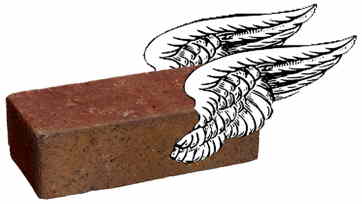 The Flying Brick was the printed directory of the Brixton LETS Scheme (this isn’t the image we used – the original is lost in the mists of time – or a cardboard box in the attic).

LETS stood for Local Exchange and Trading Scheme. Brixton LETS was started in the second wave of alternative, local currency schemes in 1992 in Brixton, South London, and I’m proud to say I was one of the founding group, and one of the team that ran the scheme in its heyday over the following few years.

The idea was that members would trade together using our own local currency – the Brick (what else?) – which was a ‘virtual’ currency – a number in a database, with no physical existence. And that this currency would have different rules to ‘normal’ money, specifically: END_OF_DOCUMENT_TOKEN_TO_BE_REPLACED

I’ve mentioned before that we’ve used FPro as a type of Rapid Application Development Platform. Building a fully functioning prototype using this high-level (largely graphical) database application has allowed us, as non-coders (albeit with a decent understanding of how a properly architected database should be structured), to develop our therapy-smarter tool in an iterative way, without spending large amounts of money.

Another benefit is that the product we are using remains fully accessible to us at the architecture and data level, and is largely self-documenting. FilemakerPro produces human-readable graphical representations of its database structure as a standard report and the functional scripts are basic-like in their use of real language, and thus easy to follow.

What this means is that, for a team like ours, without coders, the scary step of commissioning native code from people whose work we will ultimately not be able to judge in detail is made much less risky. When we judge that the time is right to take the system to the next level – when we need it to go faster and handle more clients, we will have to get the thing recoded – and this will mean bringing developers in.

For startup teams without coders, this is a terrifying point. How do you find the right person? How do you choose which framework, which language, which platform, which architecture? How can you even begin to judge the recommendations you are hearing? How can you describe the features you want?

END_OF_DOCUMENT_TOKEN_TO_BE_REPLACED

I am not a coder.

To qualify this statement, consider a parallel: I understand a fair amount about the techniques that are used to form, shape and join timber, both theoretical and from practical experience, as a designer and maker on a number of scales. But I would never call myself a carpenter, because I have worked alongside carpenters, and have a deep respect for what a skilled carpenter can do.

By the same standards, I’m not a coder, although I do have some understanding, some experience and I hope some of the analytical ability. I certainly have the same respect.

Artisanal coding cultures have had little chance to develop real depth; human culture has a pace that, speed up as we might, is still tied to the pace of organic life, and information technology, by that yardstick, is barely three generations old. On top of that, while wood has remained wood, and steel remains steel, digital culture has undergone successive revolutions – largely hardware driven – with software following behind, catch-as-catch-can.

Nevertheless (even while understanding much of the content on only the surface level), I am convinced that the c2.com wiki maintained by Ward Cunningham has material that will prove to be significant in the development of a coding cultural tradition. The interchanges there are distilled, terse, limpid and at the same time open to an almost metaphysical dimension to the practice – a preparedness to take a step back and consider the inherent qualities of how algorithmic implementation is.

OK, so the primary purpose of my venture into the world of tech is to become a part of it. I am confident of the skills, creativity and work ethic I have to offer, but somewhat short on substantive CV matter. In the long term, this blog will hopefully serve as some part of a distributed resume – an aspect of a career bootstrap process.

One plank of this will be to publish project proposals – ideas for ventures of various kinds, more or less deeply considered – to give a flavour of the way I think, the areas I’m interested in, the thought processes I use.

Going public with ideas is an interesting undertaking – taking us straight to the heart of one of the startup dilemmas – are our ideas so precious (my precious…) that we need to keep them secret until we can unveil them in glory (or at least as an MVP), or is the need to find collaborators, to develop traction, so important that it requires us to come out in the open?

END_OF_DOCUMENT_TOKEN_TO_BE_REPLACED

Pragmatic Utopian. I work to build the best future I can imagine, starting right here, right now, with what we have, having cognisance of Christopher Alexander's principle of 'structure preserving transformations'.